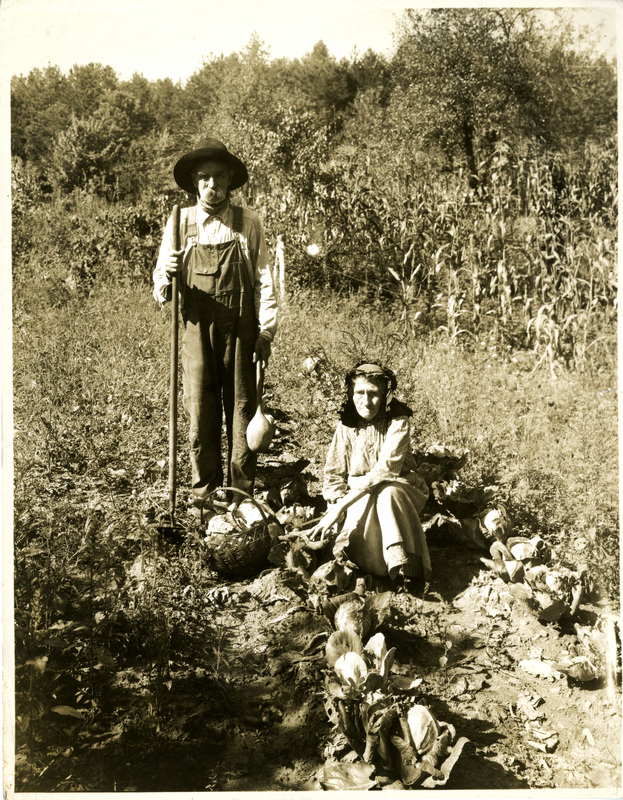 Farms in Western North Carolina tended to include a garden. Though a garden would not have been the largest part of the farm, the garden was very important. Eaten fresh or stored for later, much of what the residents of this area ate came out of their gardens: tomatoes, potatoes, peas, carrots, beans, squash, and cabbage.

Read on or return to Virtual Tour Map.

Farmers might not sell their garden produce, but what they grew there was still valuable. "Treat the Step-Child Better" (see below) includes a quotation from the agricultural extension service claiming that "the vegetables which can be grown in a half-acre garden would cost . . . $225 if bought at retail prices." When one considers that many gardens were larger than a half-acre and that $225 in 1939 is equivalent to much more today (perhaps more than $4,000), one begins to recognize the value of a garden.

The garden was also of great cultural importance. Families would pass down seeds from prized varieties. And some form of the question "How does your garden grow?" was the seed for many conversations. 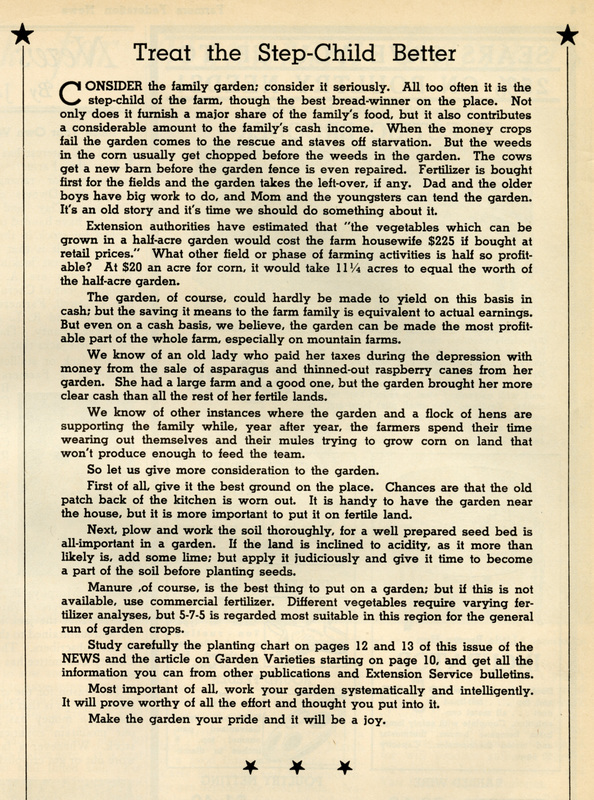 A Gallery of Garden Goods 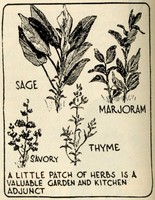 Sketch of herbs. Farmers Federation News from May 1939. 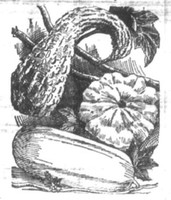 Sketch of squashes. Farmers Federation News from May 1936.

Gardeners in Western North Carolina developed some crop varieties unique to the region. The Candy Roaster, a variety of winter squash, provides one example. 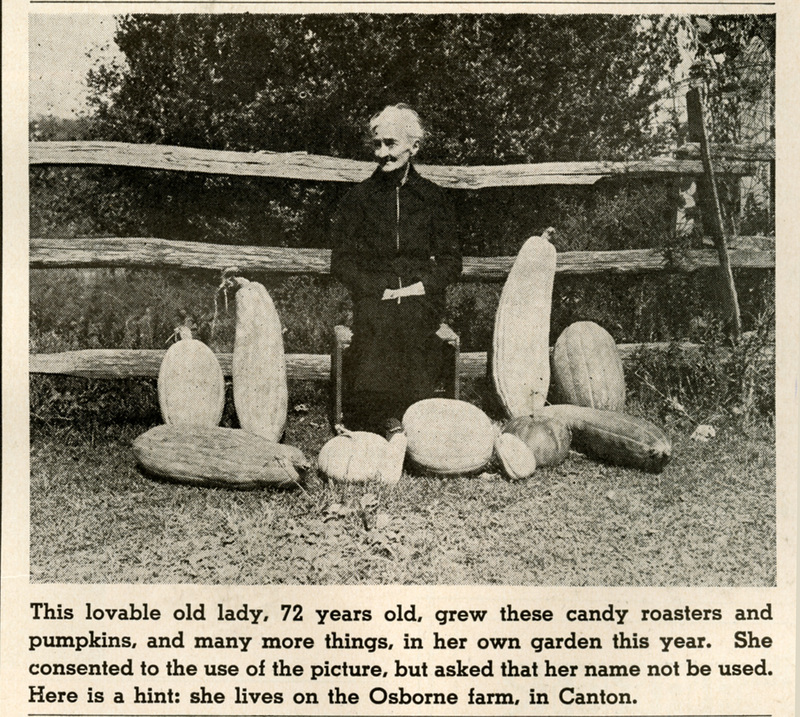 Candy Roasters could grow to tremendous size, as seen in the photograph at right. The name suggests they were quite sweet. They also store well. Such qualities made candy roasters very desirable.

To propagate the variety, gardeners would save seed from one year's crop and plant that seed the next spring. The ad below suggests that larger seed companies could not meet the demand for candy roaster seed.

The word "heirloom" applies to a crop variety, like the Western Carolina Candy Roaster, that would be passed down from one generation of gardener to the next. 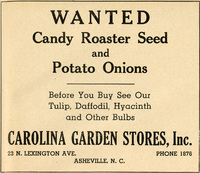 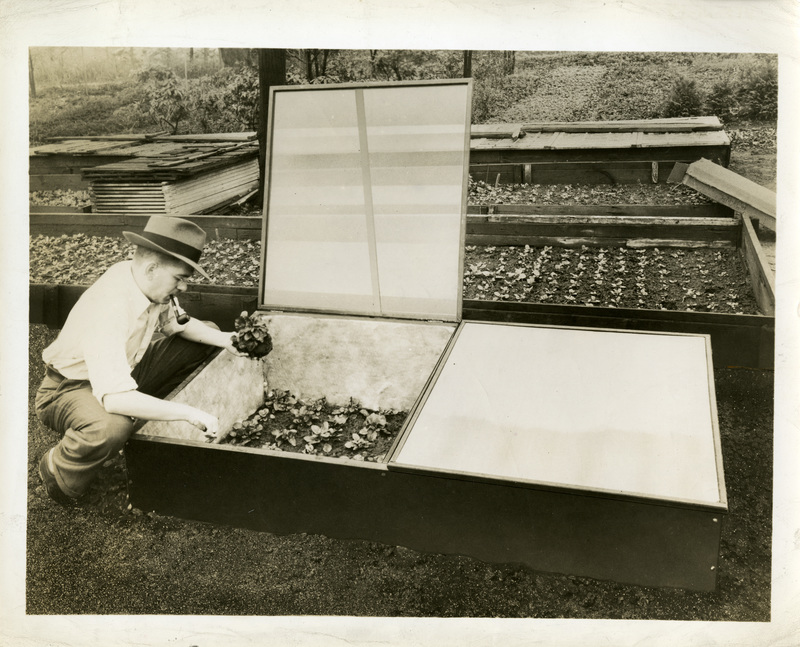 Growing a garden required a variety of tools. The soil would need to be turned either by hand or with a plow pulled by draft animals or a tractor. If large clods of dirt remained, gardeners would break them up by using a harrow or some kind of drag.

Once the soil was prepared, planting began. Some garden crops can withstand frosts. Radishes, onions, peas, and cabbage could be planted in early spring. Gardeners would wait until later in the season to plant tomatoes, beans, squash, and corn.

Some garden plants could be grown outside of the garden as well. Bascom Lamar Lunsford describes one type of bean that was given an interesting name because of where it was often grown:

"They have what they call the 'lazy wife' bean (that's the name of a bean), and I think that came from Kentucky. It's a bean that you plant on the side of the porch and it runs over the edge of the porch like a vine, an ornamental vine. The wife can go out on the porch and pick enough beans for the family just from the porch without having to go out in the fields" (It Used to Be 36).

But this is only a tiny fraction of the things gardeners might grow!

Once plants sprouted and began growing, they required care. Gardeners used hoes and other tools to eliminate weeds. If drought threatened, gardeners might have to water their crops, especially when young and small.

The cold frame in the image above and the hot beds described in the article below were ways that gardeners could extend the growing season by protecting plants from freezing. 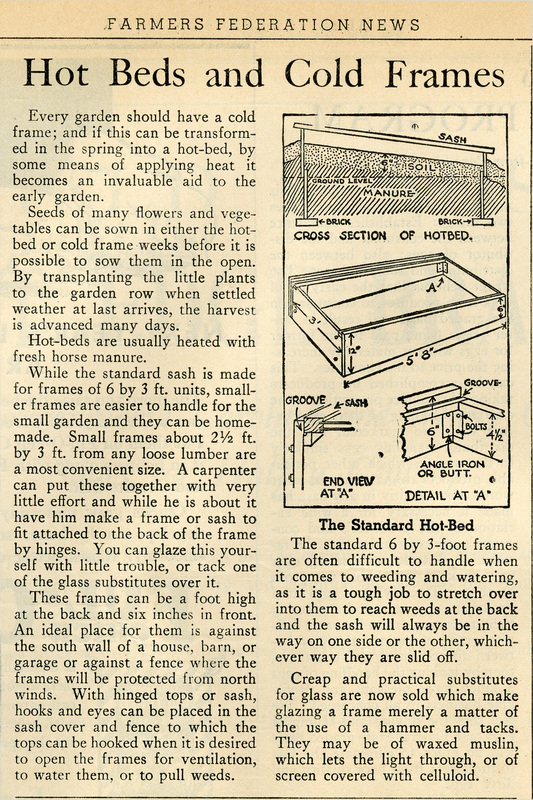 Dairy Barn and Animals →
The Garden